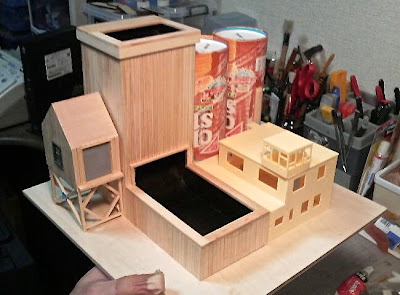 Closely following on from my last post, here's another one featuring a terrain project on which I've been working, on-and-off, for well over a few years now.

Anyone who plays Blitzkrieg Commander knows there are times when you need to roll a lot of dice- especially when you start fielding Panthers, T-34/85's, and heavy guns!

After a few games with us rolling the dice directly on the table, more often than not the dice would start bouncing off one another and start flying around.  Spreading out like so many shell fragments, they would end up careening into model vehicles, terrain and miniatures alike.  After a few scary incidents with fragile plastic parts, I long ago decided that it would probably be a good idea if we were to acquire ourselves a dice tower.

I know that dice towers can be bought commercially, and that even making one from scratch wouldn't take all that much effort.  But I wanted something unique that would be integral to the tabletop, and thought about how I could incorporate a dice tower into some kind of terrain feature or building.

As a lot of Eastern Front battles featured fights for and around factories (think Stalingrad or the grain tower at Ponyri), I thought that the classic, boxy dice tower shape would lend itself well to being incorporated into some kind of industrial architecture. so the idea for constructing the Red October Cement Factory (Красный Октябрь Цементный завод) came into being.

A quick search of the internet saw me come across this very useful site which featured plans for a reasonably sized, easy to build tower.

I printed out the .pdf files, and stuck them to the back of some dense foam board- the kind that had and adhesive surface on one side.  All I had to do was peel off the packing paper and carefully place the pages on the board as a template.  Then it was just a case of cutting out the pieces, and then gluing them together with white glue and lots of dressmakers pins! 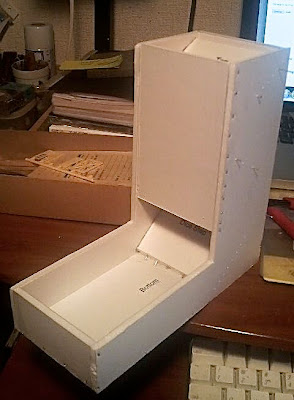 At this point one of the sides hadn't been glued on, as first the interior needed to be painted.

With the dice tower coming along nicely,  I sought out some old foam offcuts (left over from my monastery project),  a couple of junk food containers courtesy of Nabisco, and another classic old Airfix kit I was happily willing to kit-bash. 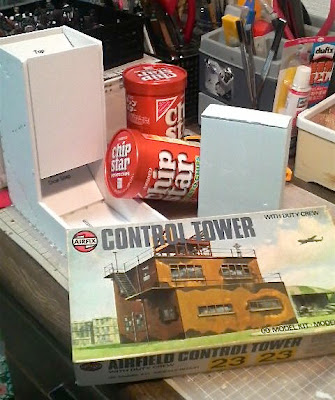 After putting the basic building together from the control tower kit, experimenting with the layout on my desk gave me the basic idea for something that would have a (relatively) compact footprint for the gaming table on no more than a 30cm x 30cm base.  Something that would be manageable to carry around, yet remain imposing. 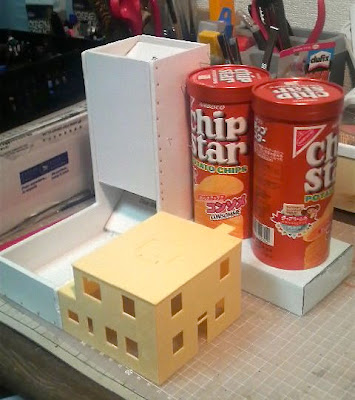 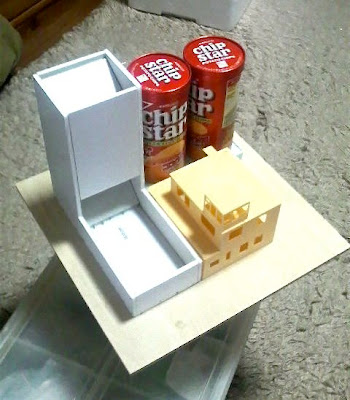 Next stage was to paint the interior of the dice tower and slap on the sides. 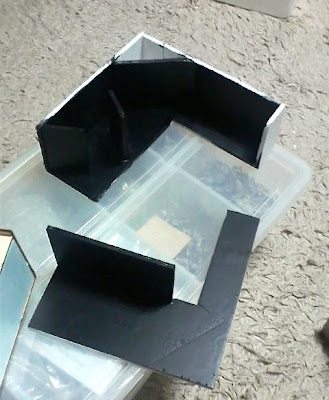 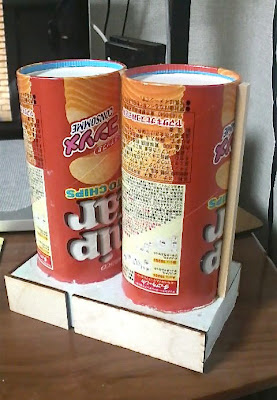 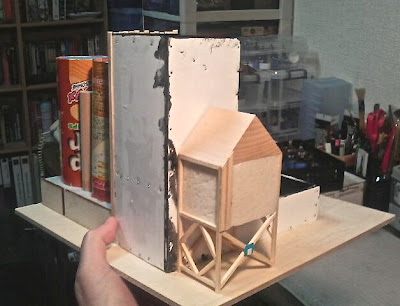 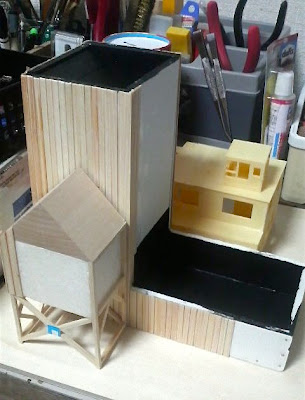 Everything was faced with wooden strips.  I decided to go vertical rather than horizontal with the facing, based on some pictures I saw of old factories, and also to give the structure a sense of height. 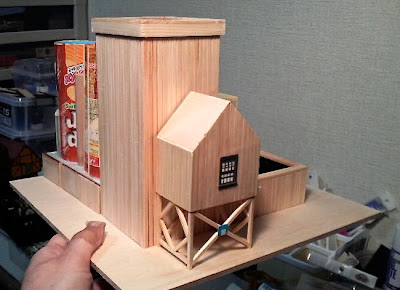 This all took time, and I got pretty tired of it at one point!  But after a long break, I got back to it and added a covered conveyor system to the top of the tower.  Right now I'm looking for material that can be used for the corrugated iron roofing, and then its adding pipes, a crane, wires, and assorted industrial frippery to give it atmosphere.

But right now, I need to work on tarting up the administration building (the old control tower), so that it has less of an Airfix-y look about it. 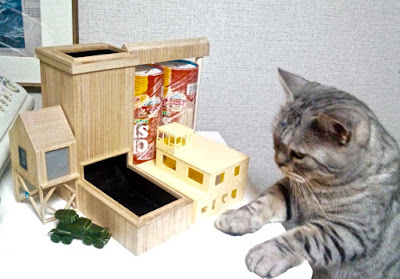 No, its not a litter box, although he was fascinated with the sound of the dice rattling down the tower and seeing them appear in the tray.  He'll have to be watched.

Hopefully I should have it done by the end of the month, in time for a game in May.