Not much activity on this blog over the last year, basically because the focus at the West Tokyo Wargamers has been on Napoleonic wargaming using Warlord Games' Black Powder rules.

However, on our gaming day in February, most of the usual grognards were unable to make it due to various commitments.  So without a quorum for Napoleonics, Giovanni and I both felt that it could be a good opportunity for a long-overdue game of Blitzkrieg Commander II.

So we decided that we would leave the olive groves of the Peninsula behind us for the day, and instead dust off our Soviets and Germans for another bloody struggle among the birch forests and rolling steppes of the Eastern Front. 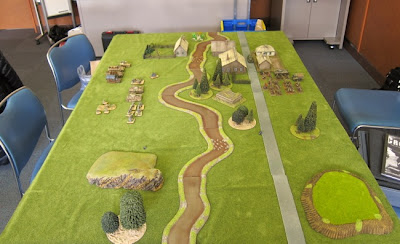 We decided to keep the game small- 1000 points from late 1943. The evening before the game we devised our lists using the oh-so-useful Battlegroups Online tool over at the BKC website.

It didn't take long to discover that you don't get much for 1000 points!  But that was part of the challenge, tweaking and varying the possible choice that would get me the best "bang" for my virtual rubles.

And when I saw what a tiny force Giovanni was able to field with only 1000 points worth of Krupp steel and lantern-jawed Lansers from the corresponding German list, maybe I would have a chance!

Giovanni's Huns.  The A/T gun is there for decoration, as Giovanni didn't have enough points to pay for one. But he was able to field two Pz-IV's, a Grille SPG, and a number of halftracks and trucks full to the brim with well-armed and ruthless warriors of the Third Reich. 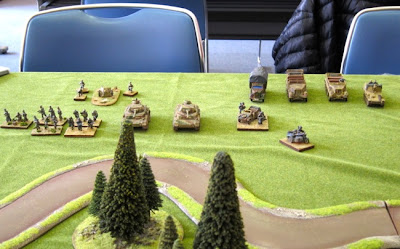 Most of my points were spent on infantry- lots of it.  I went for just one tank, but selected a good one; an OT-34 flamethrower variant. Very nasty if it could get to close quarters.  My artillery consisted of two indirect fire weapons- an 82mm and a 120mm mortar.  I had enough points left over for a 76.2 gun for A/T work.

I went for three command stands, one with a factor of 8, the others of 7.  In contrast, the Germans would be able to run rings round me with their two stands, which boasted a command rating of 10 and 9.  They also enjoyed a command radius of 20cm (being Soviets, mine was only a measly 15cm).

So as far as tactics went, the K.I.S.S. principle dictated that I wouldn't be trying anything too adventurous, lest I get my bare Bolshevik butt spanked by the much-more-mobile Fascists for my pains. 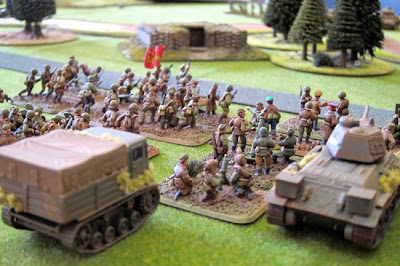 NKVD make sure that the Soviet infantry are dutifully maintaining the required Revolutionary Zeal- or else! 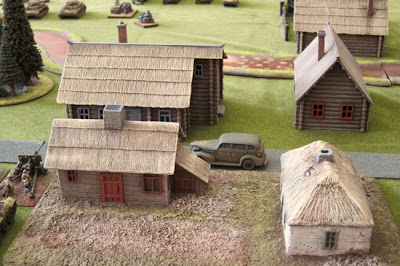 View of the village (hamlet really). 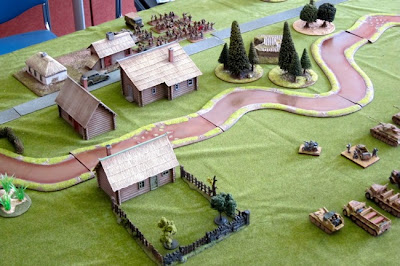 The river ran down the middle of table lengthwise, with two crossable fords. 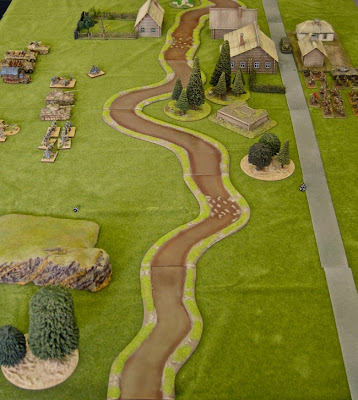 The Soviets had built a timber bunker in the woods next to the village, covering one of the fords.  As it turned out, the Germans were able to drive across the ford with impunity due to good command rolls on their part, and shitty shooting on mine. 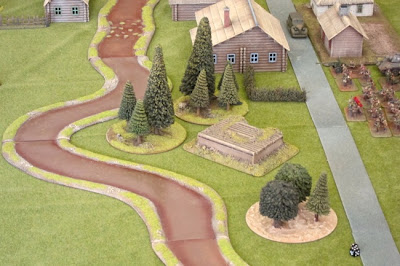 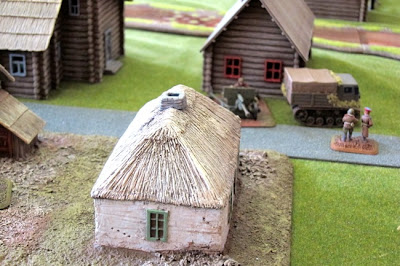 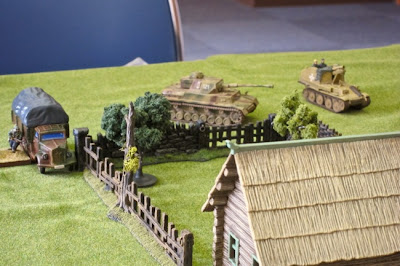 The Germans started with an attack on the settlement with part of their force, while Panzer Grenadiers supported by a Pz-IV commenced a flanking attack. 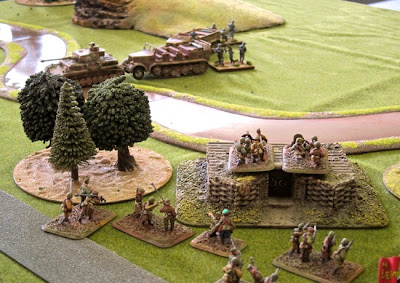 The bunker was actually designed for our 28mm Napoleonic games as a powder magazine for a redoubt, but it works just fine here. 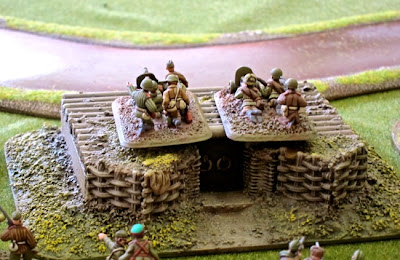 The OT-34 heads off to take on the infantry, but trying to pass the necessary command roll proves elusive. 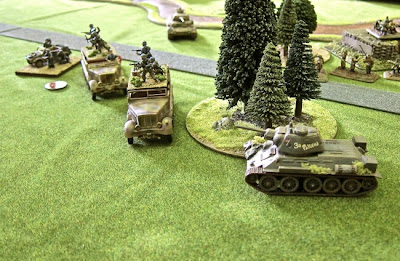 And then the PZ-IV has him in his sights... 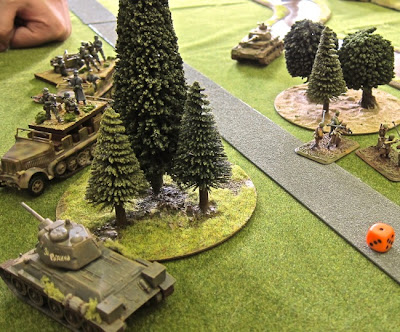 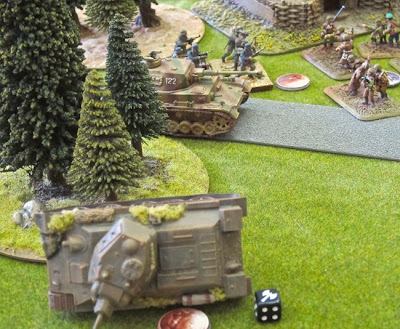 The elated Pz-IV crew went on to celebrate by blasting my now-exposed 82mm mortar team into oblivion.

The Soviet field telephone lines were becoming red hot with panicky calls for help, only to be answered with terse instructions to just suck it all up, and to get on with the job of ridding the Motherland of the Fascist threat.  Orders that were well-seasoned with dark, dire and deadly serious threats.

With the Pz-IV apparently crushing the Soviets like so many ants, its following German infantry- now without the OT-34 to cower from- discover new-found courage, and decide to launch an attack in a determined effort to clear out the Soviet infantry holding the woods.

We learned here that this is where a Soviet infantry force is at its best; in short-range fighting, in close terrain, and where numbers count. 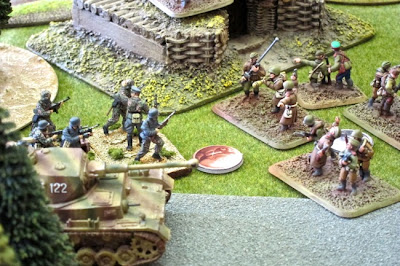 It was a very long time since we last played the game, and even longer since our last large-scale close combat engagement.  So were unfamiliar with the game mechanics, and had to refer in detail to the rulebook.  The rules work elegantly well for infantry fights, and turned out a lot easier to work out than we had expected (once we got it right!)

The German infantry fought fiercely, but in the face of overwhelming local odds were eventually repulsed, never to return.  For them, ze war vas over.

Meanwhile, German infantry enter the village, but find themselves held at bay by some very accurate mortar fire. The mortar was to give sterling service throughout the game. 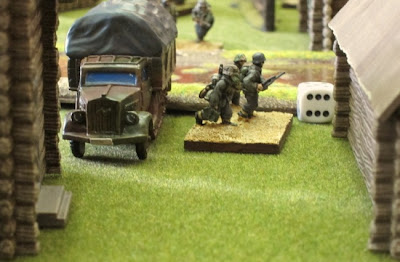 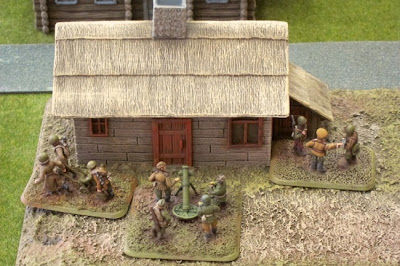 The all-destroying PZ-IV was on the prowl for fresh prey, and soon found itself engaging in a dual with my 76.2mm A/T gun, which now found itself on the verge of being outflanked.

Fortunately it was able to turn to face the threat, but its crew were very much aware that the Germans were encased in several inches of hardened Krupp nickel-steel plating.  In contrast, the Red gunners had only the thickness of their padded cotton jackets for protection. 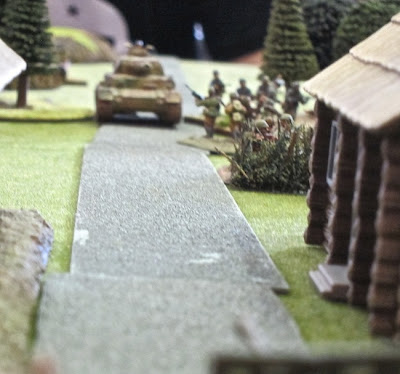 But luck was on the side of the doughty Popovs this time, and had run out for the Germans.  Scratch one Pz-IV. 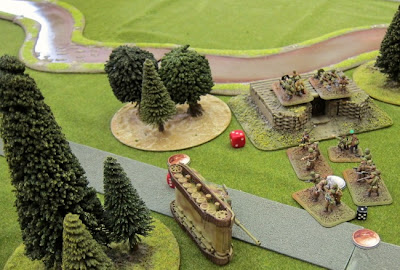 It didn't help that Giovanni neglected to chance another shot by taking one more try at a command roll.

The remaining  Pz-IV, assisted by a Grille SPG, advances in support of the hard-pressed German infantry in the village. 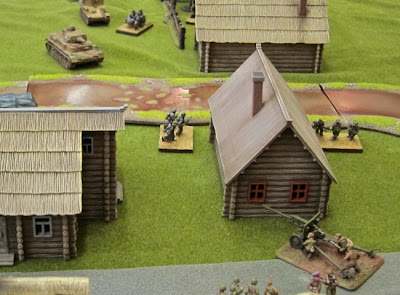 These now face the prospect of a whole company of Soviet infantry rushing to aid the defense, all flushed with confidence from their having just recently thrashed the Hitlerite flanking force. 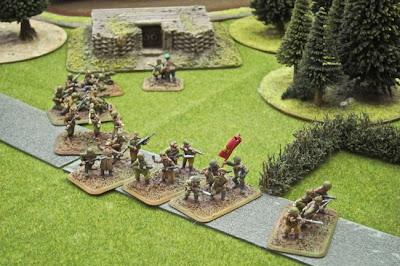 But with such a small force, the Germans have taken losses that they cannot really afford.  They have to roll to see if they break under the pressure of excessive casualties- and lo and behold, they do! 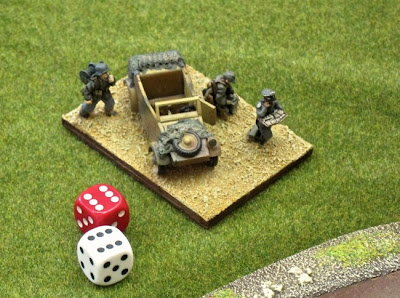 The Germans decide to call off the attack, and lick their wounds as the commanders go back to the drawing board.  They would be back- but doubtless only after the Stukas get their chance to even the odds.  But that would be a story for another day.

So a rare Soviet victory!  We really enjoyed the game as it was very much touch-and-go.

The Soviets didn't have much in the way of sexy armour and mobility, especially once the OT-34 flamethrower tank was toasted.  And don't expect too much in the way of complicated, sweeping maneuvers given their poor command factors and tactical doctrine. But give them a strong position, and a built-up area to fight in, and they are in their element.

Well worth dusting off the figures, and it rekindled my interest in WW2 gaming.  After the game, I decided to beef up my forces and ordered some of the new T-70's from PSC, along with some field guns.  I can't yet decide to assemble them as 57mm A/T guns, or as a battery of 76.2mm field guns.

Great to see you guys playing BKCII again after quite a break. Lovely looking table as always. Just one thing, the command radius is 20cm for all sides, it is the initiative distance that changes, in this case 15cm for the Russians. Hope this helps for future games?

Thanks for commenting, Steve.


And thanks very much for the clarification! It helps very much indeed (as the Soviet player!). We just assumed that the 15cm rule applied to all command distances.

No problem Robert. I've enjoyed playing the Soviets many times against my good friend Craig and his German SS units. Soviets great in defence where their numbers really help, but not so good in attack. Also remember that there is no command penalty to units on roads or mortars and infantry guns which I've found to be a real bonus. Another useful rule is the +1 command if all the units under command do the same thing, such as move, shoot etc. Can be very handy at times.

Great looking game. Those houses are magnificent, and it goes without saying that the figures and models are first class. Great viewing.

All except one of those buildings are by Pegusus Hobbies, the whitewashed hut being a resin offering from Britannia Miniatures.

The Pegasus models paint up quickly and very well, as they have very deeply moulded detail that is easy to pick out effectively by dry brushing.

I have a few more I need to get around to doing, as well as a resin train station (but until I get some railway track, it will look pretty out of place!).

Wonderful terrain and great vehicles too. I think good buildings really make a wargame table. Have you seen the new Pegasus Russians sets? Three are just out or coming soon. Victory over Facists has Zhukov on a horse!
Mike Bunkermeister Creek
http://bunkermeister.blogspot.com/